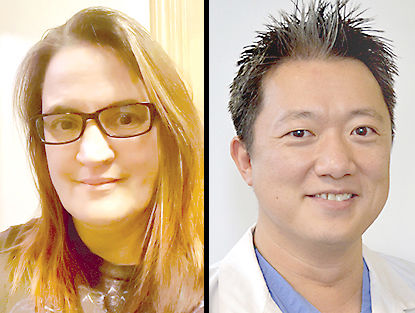 Lisa Holgash of Adams Township and Cathy Fleegle of Berlin say they enjoyed Thanksgiving dinner more this year, thanks to a new procedure being offered at the Windber hospital.

Both women suffered from chronic acid reflux and heartburn, known in medical terms as gastroesophageal reflux disease and found relief with a procedure by Dr. Taesun Moon at Chan Soon-Shiong Medical Center at Windber.

Holgash said she would get pain, burning and bloating after eating. She was taking prescription acid reflux medicine for about 14 years.

“I took one every day,” Holgash said. “If I missed one in the morning, by that evening I’d be hurting. It was really bad.”

About two years ago, the medicine wasn’t working as well. Her gastroenterologist, Dr. Rudolph Schilli at Windber, ran more tests and suggested she contact Moon about the new LINX Reflux Management System.

The LINX system, created by Torax Medical of Shoreview, Minnesota, implants a small, valve-like device between the stomach and the esophagus to prevent stomach acid from moving up into the esophagus.

In most people, the a bundle of muscles called the lower esophageal sphincter keeps stomach acids from back washing.

“The bottom part of the esophagus may not be working the way it’s supposed to, to prevent the acid from refluxing into the esophagus,” Moon said. “It may not close off completely.”

The LINX implant features flexible band of magnets enclosed in titanium beads. The beads attract to each other, helping the lower esophageal sphincter to close, preventing reflux.

Moon said patients who don’t respond to medication have traditionally been candidates for Nissen fundoplication, in which part of the stomach is wrapped around the lower end of the esophagus to reinforce the lower esophageal sphincter

Originally developed in 1955 as an open surgical procedure, the Nissen fundoplication is now done laparoscopically with tiny instruments fed through a small incision

Although it is still considered the gold standard, Moon said, there are some complications associated with the procedure and it may not be for all patients.

The LINX system has several advantages, he said.

“It is a simpler procedure,” Moon said. “There are no changes to the anatomy, so it can be reversed more easily.”

Holgash said she talked to Moon and Schilli and did her own research before deciding to have the LINX implant. She first considered the Nissen surgery. “There are more restrictions on diet (after surgery),” she said. “I thought: I don’t know if I want to do that.”

The next problem was getting insurance to pay for the new technology. Both Holgash and Fleegle said it took a fight to get their coverage.

It is a common problem, Moon said. “The insurance companies have set up a very good appeals process,” Moon said. “There is no cost to the patient for the appeal.”

Holgash said her claim for preapproval was denied twice before the independent physicians review board approved the procedure.

Both women had their procedures in late September and say they have been happy with the results.

Fleegle said her implant has provided relief from years of chronic heartburn and reflux.

“I was on acid reflux medication for years and nothing has taken care of it,” Fleegle said, adding that the damage to her esophagus led to more serious complications. She developed Barrett’s esophagus, a change in the lining of the esophagus that increases the risk of cancer.

After her procedure, Fleegle said her Thanksgiving dinner was the best in years. In the past, for instance, pumpkin pie would often cause a flare-up.

Share this ArticleLike this article? Email it to a friend!
Email sent!